In the last two years, it is becoming more and more obvious that immersive technologies are here to stay. Both Virtual and Augmented reality have enormous potential to disrupt the industries as we know them and change the way users interact with the products. And while some industries have embraced these new technologies, others still appear a bit hesitant.

Although popular in the travel and automotive industry, Virtual Reality still has a lot to prove in Advertising&Marketing. Let’s face it, advertising is all about the return on investment and some companies seem reluctant to adopt Virtual reality until this new technology proves it can be a good investment. At the end of the day, nobody wants to invest into something that will yied poor results. To determine whether Virtual Reality can provide positive ROI, we take a look at some of the more creative uses of VR and crunch the numbers of some promotional VR campaigns made so far.

Trade shows play are among the most lucrative marketing methods for B2B businesses. They are the place where companies present their products, show off their achievements and – most importantly – score new clients. In the past, it was all about who has the best looking, most attractive stand, but there is a new player in town and it is stealing the spotlight.

Virtual Reality has proven a perfect fit for trade shows. It attracts potential clients to the company’s stand, it allows the company to differentiate from competition and it allows the users to fall in love with the company’s products. If we ignore the boost to branding that you get from a wonderfully crafted VR experience, VR on a trade show still makes a lot of sense for companies with more expensive products. Clients report 29-33% increase in leads generated from trade shows when using Virtual Reality in comparison to years before.

So can you justify the cost of having a VR experience on a trade show? You can, if the additional 33% increase in sales allows you to cover the cost of VR content. Companies additionally improve ROI by using the VR experience on multiple trade shows or setting up a VR system at their headquarters where it works as a promotional tool. You can use the VR ROI Calculator for an idea of what kind of return on investment you can expect.

A high-end LED lighting company – Ledluks Lighting Solutions – commissioned a VR experience for use on PLDC in Paris and Light + Building in Frankfurt. The VR experience, made by Creative Solutions, showcases Ledluks’ complete line of products and allows the user to see, interact with and test the products just like in a real-life scenario. 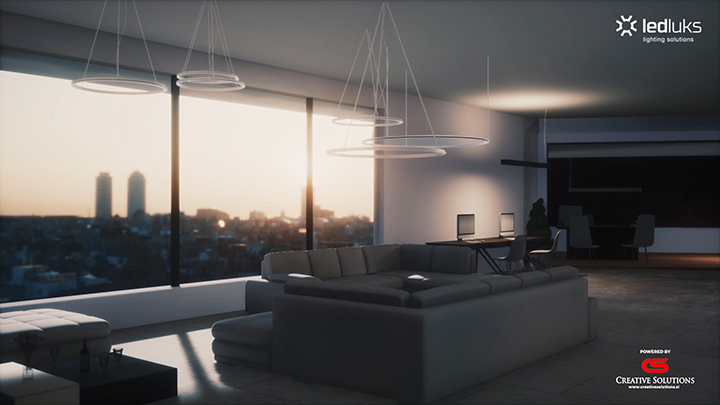 The user starts in a hall, with several separate rooms around him. Each room represents a typical environment in which a LED light can be used. When the user walks to a room, the lights in that room automatically open, emphasizing the auto turn on feature of the Ledluks’ lights. Additionally, the user can change the intensity, temperature/color and the beam orientation of the lights. LedLuks not only showcased their whole range of products with the VR system, they also lowered the cost of the stand and the transportation expenses as they didn’t need to have every product in their line physically at the show.

360 virtual reality videos are another creative way of advertising a company’s product. Instead of using a normal, 2d video, the company can opt to record or render a 360-degree video, that the user can interact with. Although limited compared to a full VR experience, the 360-video is easier to distribute and shared with the masses.

Before going too deeply into examples, let’s look at a study, made by Google. Google came up with statistics for 360 video advertising. In total, the 360-video ad organically gained 46% more views and 41% more interactions (shares, subscribers) than the standard video. As a result, the 360 video was a more efficient buy, since its cost per view was lower when organic and paid views were combined.

Example: Try Before You Fly

A example of a great VR ad campaign is Thomas Cook’s “Try Before You Fly”. The VR video experience basically allowed the users to try five different holiday experiences before booking one of them. The users could hop on a helicopter tour of Manhattan, visit the Egyptian pyramids or walk along the OCBC Skyway in Singapore without leaving the store.

Not only the VR ad campaign contributed to the 190% increase in bookings, the company also won the 2015 Mobile Innovation Award, the 2015 Retail Week Customer Experience Award and was nominated for several other awards, getting a lot of free PR out of the VR Experience.

There is plenty of evidence that VR can provide an excellent ROI both as a full user experience as well as a 360-degree video ad.

Are you ready to take the first step into the world of Virtual Reality?